Track Rock Gap Archaeological Area is the location of a series of soapstone boulders covered with petroglyphs made by Native Americans over 1,000 years ago. There are hundreds of carvings in a wide range of figures. It’s one of the most significant rock art sites in the Southeastern United States.

Track Rock was a place of power within the sacred landscape of the American Indian Nations where the activities of ancient humans were influenced by spirit beings. It sits at the threshold of the spirit world. Rocks carved with footprints and tracks signified a doorway into the domain of dangerous spirit beings. Depictions of footprints and tracks are physical testimony that spirit beings were there at some time in the past, that they could still be lingering somewhere close by in the present, and that they may return unexpectedly at any time in the future.

As early as 3,600 years ago, Native Americans were removing pieces of the soft but durable soapstone to make bowls which were particularly well suited for cooking as they held and radiated heat without breaking. The picture carvings were made by Native Americans during repeated visits over several hundred years beginning around A.D. 1,000. Most likely, the Cherokee, Catabwa and/or Creek tribes made the carvings. In the 1800’s, early American explorers discovered the Track Rock site and it has fascinated people ever since. Recording, studying and preserving of the site began in earnest in 2009. 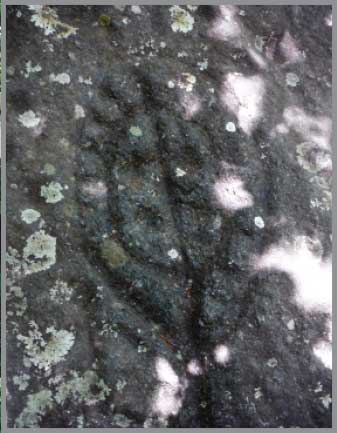 The carvings at Track Rock were made in one of two ways. Many of the figures were created by repeated blows in the same spot using hammer stones to create the desired shape. Some of the figures were created by rubbing a hard stone back and forth to carve the design into the rock. Although soapstone is considered a soft rock, it is still rock and rather hard to carve. It took a lot of time and effort to create these figures that have lasted a thousand years. Some of the shapes that can be seen include: 252 cupules, 22 oval shapes, soapstone bowl extraction scars, deer, horse, bird, squirrel, and bear tracks, cross-in-ring motifs and nested ring design, human figures, human footprints (one with 6 toes!), and one giant’s, footprint, maze-like networks, squares, tridents, zigzags, curved and straight lines, and scalloped edges. Unfortunately, signs of vandalism can be seen throughout the area in the form of square shaped depressions with flat topped pedestals in the middle that are left behind when looters chisel out the petroglyphs. There are also several areas when vandals have carved their initials over the top of the ancient marks forever destroying those petroglyphs.

Track Rock Gap is open to public visitation and no fee is charged. When visiting the site, remember that the intensity of natural lighting can influence how much you are able to see. Bright mid-day sun makes it hard to see most of the figures, and the best times to visit are early or late in the day, when the light is at a low angle. Please be respectful of other visitors and the people who made these carvings. Previous visitors removed pieces of the boulders, thus depriving future visitors of the chance to see what they thought was so special.

For more information about Track Rock, including a printable fact sheet with drawings of the petroglyphs, please visit: fs.usda.gov/goto/conf/trackrock